The New Zealand SailGP Team is third on the event leaderboard after a tricky first day of the Dubai Sail Grand Prix, which saw all nine teams battling to get up - and stay up - on the foils as winds dropped throughout the afternoon’s three qualifying fleet races.

Great Britain will enter championship Sunday in pole position with 25 points. And with only two points separating the next six teams in the fleet and winds expected to pick up tomorrow, anything can happen as crews fight for their spot in the winner-takes-all final. 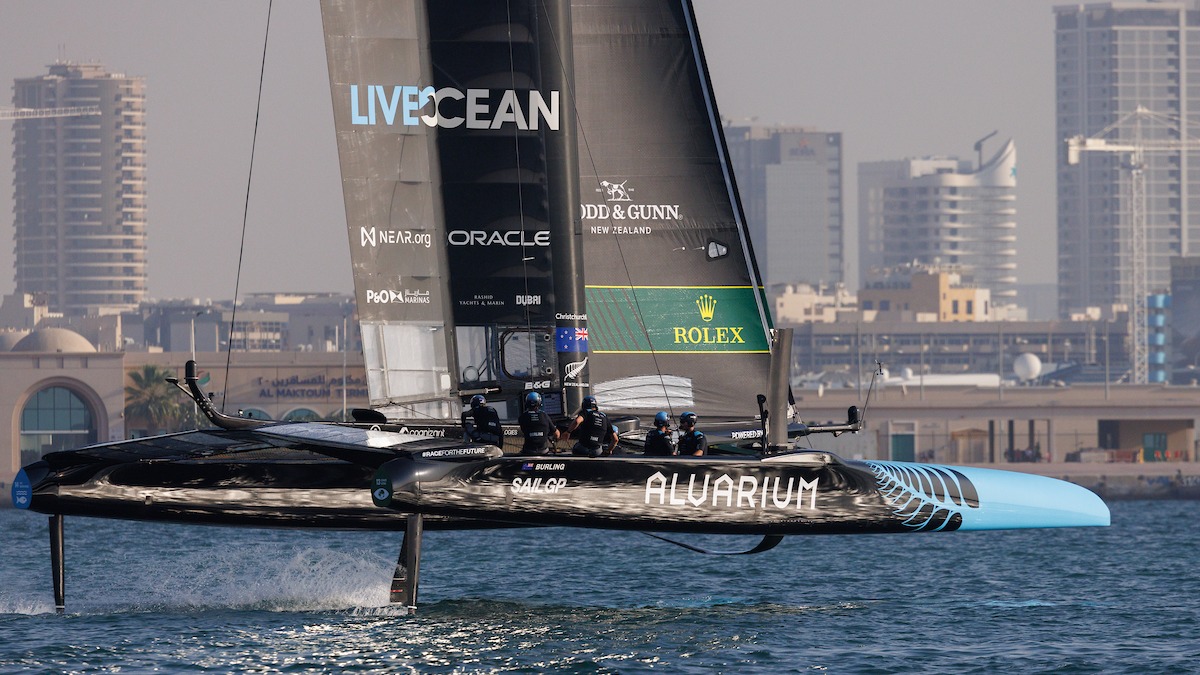 Recapping day one, coach Ray Davies said, “It was pretty light, tricky conditions out there - with ups and downs, snakes and ladders all throughout the day. We had a couple of good races at the beginning, a tough one at the end and conditions were pretty dynamic, so difficult to keep that nice, clear air the whole way around the racecourse.”

After a fourth-place finish in race one, New Zealand turned up the heat in race two, leading the fleet from mark one but Great Britain couldn’t be ruled out, finding the pressure needed to get up on the foils and overtake New Zealand less than 200-metres from the finish to win in race two.

The Brits performed a similar manoeuvre again in race three, overtaking USA on the final leg to take the win, while the Kiwis fought back from last to finish seventh, but couldn’t quite catch Quentin Delapierre’s French team in sixth.

Jo Aleh, who moved from strategist to grinder as all teams adopted a four-up configuration to make the most of light air, described the day’s conditions as, at times “painful.”

“It was a tough day - pretty tough for everyone so happy we got a few things right and a bit to work on for tomorrow,” Aleh said.

“It can be painful out there trying to figure out [the conditions] - you’ve got one boat foiling, the rest aren’t foiling and the consequences of trying and getting it wrong can be tough."

When nine F50s take to the waters of Port Rashid tomorrow, they’ll do so with 24-metre wings on board and stronger breeze on the forecast. But one thing that won’t change is the tight course - a scenario Davies says should make for “pretty spectacular” racing.

“There’s quite a bit more breeze on tomorrow but that tight course isn’t going to change, so you can be sure it will be exciting,” Davies said.

Looking ahead to tomorrow, Driver Peter Burling said, “It’s going to be one of those weekends where you need to fight for every point because every point is super important. We’re happy to be at the right end of the leaderboard going into day two but we’re under no illusions about how tight it is.”

“The goal tomorrow will definitely be to make it through to that final. All options will be open then.”

The Dubai Sail Grand Prix presented by P&O Marinas returns tomorrow, LIVE on Sky Sport NZ at midnight (Mon NZDT), with the first replays served up at 0730 the next day. Racing will also be available live and on-demand on YouTube.