The Kiwis have continued their dominating streak, winning two of three fleet races to finish day one of the Range Rover France Sail Grand Prix in pole position. New Zealand has now won nine of the last 13 races.

There was no shortage of wind or drama on the stunning waters of Saint-Tropez, with wind gusting up to 30 knots and all teams recording speeds above 90 kilometres per hour (kph). France earned a new SailGP speed record of 99.9kph in front of thousands of cheering fans at home. 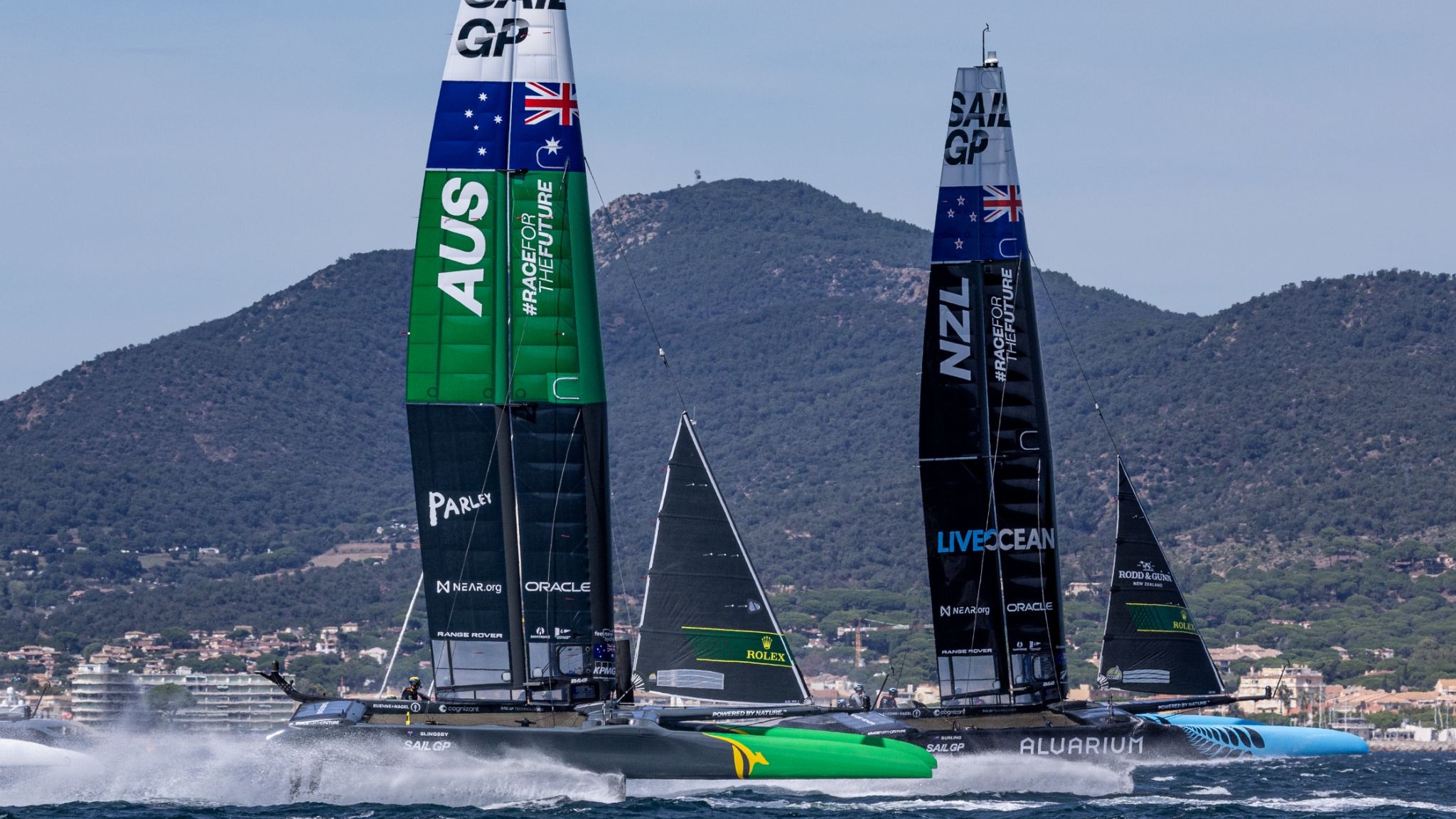 But perhaps the most heated action of the day took place between trans-Tasman rivals New Zealand and Australia on the final leg of race one.

Explaining the incident, Wing Trimmer Blair Tuke said, “On the final upwind of race one, we found ourselves trailing both the British and Australians. We executed two quick-succession tacks well to get ahead of the British and with the Australians slow at the mark, we tucked inside of them which meant we were both headed for home at the same time.”

“In sailing, the leeward boat has the right of way, so Australia had to keep clear. They tried to push over our bow to get to the mark first but we defended the position and Australia lost control,” Tuke said.

Driver Tom Slingsby worried damage from his crew’s nosedive would be irreparable, reacting onboard: “All of this damage over something so stupid. We would have happily given the position and now we have all this damage because [Kiwi Driver] Peter Burling wanted one extra point. It’s ridiculous.”

But Burling had another view and umpires agreed: “[Australia] were obviously pushing super hard for the win. It would be very easy for Tom to slow down in that situation, concede and take a second but he wanted to push for the win so we defended. Not sure what he’s complaining about but definitely a bit out of line. I think us drivers may need to pitch in for anger management lessons for Tom,” Burling said.

Australia was not alone in requiring a pitlane-style fix for their F50, with Great Britain also sustaining significant damage which forced a delayed start to race three. And while there were no major repairs required on Amokura, Tuke said the Kiwis “didn’t quite come away unscathed,” with grinder Louis Sinclair sustaining an injury to his face during a nosedive onboard Amokura, ruling him out of the competition for the remainder of the weekend.

“When the conditions are right at the top end like they were today, you are trying to look after the boat and the people and the consequences are high when you get it wrong. It's great to come away with three strong races and get the boat back to base in good shape. Louis is being assessed now and we’re hoping it’s not too serious,” Tuke said.

“It was an absolutely epic day and we found ourselves right in the fight in races one and two to finish with a first and a fourth [respectively]. That last race was a bit more simple: we had a great start then sailed the boat well around the track to finish first ahead of France and the USA.”

The Range Rover France Sail Grand Prix returns tomorrow, with live racing at 0030 (12.30 AM) on Sky Sport NZ, first replay at 0800 AM. Racing will also be streamed live and on-demand on YouTube.

While lighter winds are forecast, there will still be plenty of excitement, with organisers planning for a four-race “Super Sunday” format where teams will compete in an additional (third) fleet race before the winner-takes-all final. The final decision will be made by race management, depending on conditions.