Penalty dashes New Zealand's hopes of a podium in Dubai, while Aussies scrape through to the Final and win the event

A penalty against the Swiss has dashed New Zealand’s hopes of a podium finish in Dubai, while the Aussies scrape through to the final and win the event after climbing their way back from second to last in qualifying fleet races on day one.

New Zealand remains second on the Season 3 leaderboard overall, now nine points behind Australia and one point ahead of France, who finished second in Dubai. 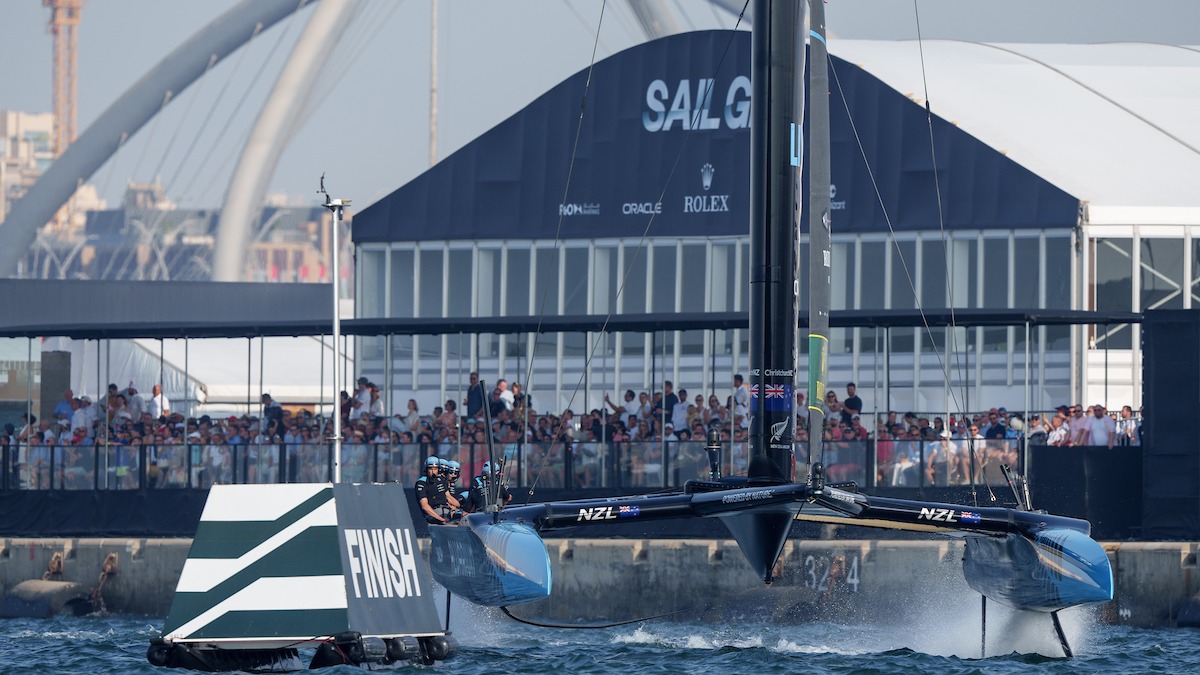 The day was off to a flying start for the Kiwis, who won the start in race four, consistently gaining distance on the rest of the fleet to finish cleanly in first ahead of Great Britain in second and France in third.

In race five, two-time SailGP champions Australia made clear they weren’t finished yet - staging the beginnings of their event comeback, leading from the start to finish nearly a leg ahead of the rest of the fleet. Fighting back from last, New Zealand fought up to seventh before overtaking Swiss on the final reach of the course to finish sixth.

However, what looked like smooth sailing into the final wasn’t meant to be, with the Kiwis penalised four event points after being ruled at fault for contact with the Swiss in the start of race five. The penalty proved fatal when the Kiwis finished fifth in race six behind Great Britain in fourth and Australia in third.

Tied for points with the Kiwis, the Australians scraped into the final by way of placement, going on to win the event ahead of France (second) and Great Britain (third). In SailGP, where teams are tied in points, the team who wins the race prior is awarded the dominant standing.

Wing Timmer Blair Tuke said, “We were right in the fight this morning so we knew we needed to come out strong and we did just that winning race one, but unfortunately things changed quite quickly from there.”

“When it’s tight in the fleet and especially on a close racetrack like this, you need to get off to a good start if you want to have a good race and unfortunately we pushed a little hard, got sandwiched between two boats”

“In SailGP, these assets are so valuable - both in cost and in the time and labour required to make repairs, so there are some really strict rules in place for when boats come into contact. Today, we were penalised in weekend points, and subsequently in season points.”

“With the penalty, what could have been a really good weekend for us has quickly shifted to a pretty disappointing one. We had a real shot of making it into the final, the team was really sailing well and we would have backed ourselves for the win but consequently finished fourth in the weekend on countback, which is pretty brutal on top of being docked two additional [season] points.”

“So, we’ve slightly lost contact with the Australians on the leaderboard and the other teams have closed in but the positives are we’re definitely sailing the boat better. We’ve said right along that we’re here for the long run and we’ve been in these situations before. As always, we’ll debrief between events and come back firing in Singapore.”

With the final event of 2022 now done and dusted, SailGP returns 14-15 January for the Singapore Sail Grand Prix - another first-time venue for the world’s fastest-growing sports and entertainment property. Kiwis can relive all the action from Dubai on Sky and on YouTube. The first replay is on Sky Sport NZ