The New Zealand SailGP Team is off to a flying start in Plymouth, finishing in pole position at the end of day one of the Great Britain Sail Grand Prix with 28 points out of a possible 30 on the board.

After finishing second, second and first in back-to-back fleet races on the stunning waters of Plymouth Sound, the Kiwis lead the fleet heading into the second and final day of racing on Sunday 31 July (BST) followed by Australia in second and France in third. 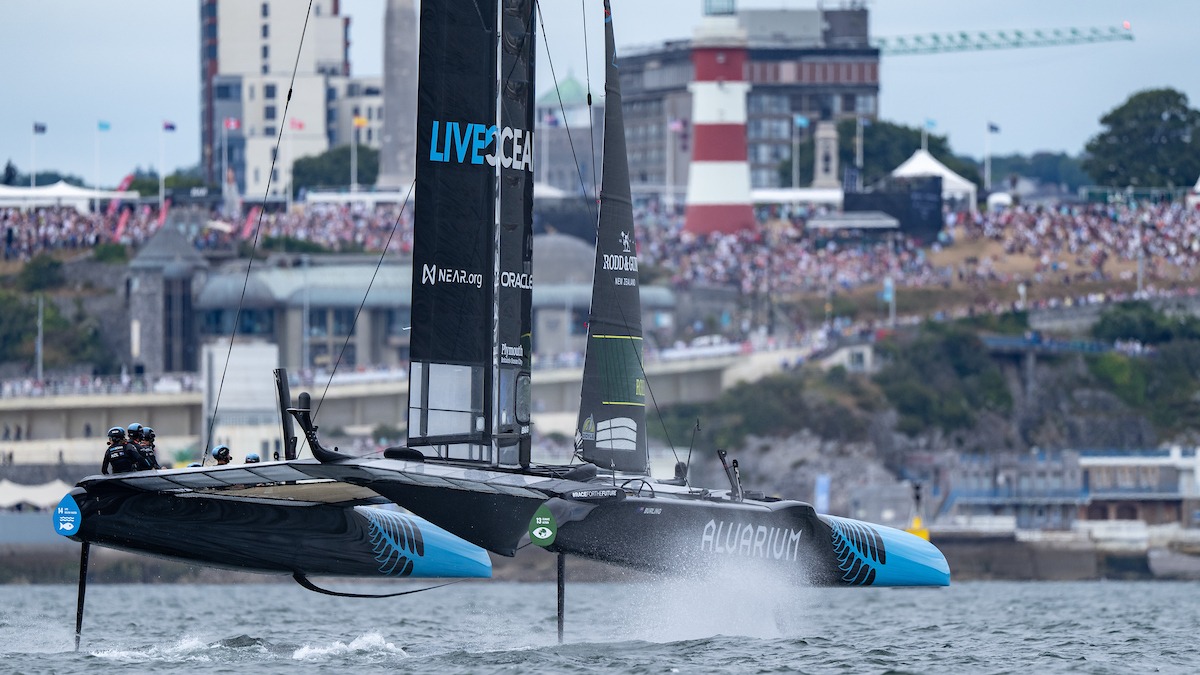 New Zealand Wing Trimmer Blair Tuke says, “It was certainly a great day for us, a really solid performance from the team. It’s been a long time coming to put three good races together like that, so the team is feeling stoked.”

Describing race one as “a real grind,” Tuke says the Kiwis maintained their composure and sailed the boat well to stay at the front of the pack after a mistake at the second mark dropped the crew into third. But it was all go for the Kiwis after an incident between France and Canada at the final mark opened the door for Driver Peter Burling to seize the opportunity to overtake France, sliding through to finish second hot on the heels of Canada.

An incident between France and Canada at the final mark opened the door for New Zealand and Driver Peter Burling seized the opportunity to overtake France, sliding through to finish second hot on the heels of Canada.

From there, things got a bit easier for New Zealand. A well-executed start in race two helped the Kiwis surge to mark one in great shape, battling it out with Australia for much of the second half of the race to finish second behind their trans-Tasman rivals. And the third and final race of the day was New Zealand’s for the taking, with the Kiwis growing a comfortable lead throughout the race to finish a cool 890-metres ahead of the rest of the fleet.

Today, the Kiwis delivered the consistency they’ve been missing so far on the SailGP circuit after finishing sixth in Bermuda and fourth in Chicago. Tuke acknowledges there’s been no silver bullet but rather lots of incremental change, evaluation and honest conversations about all aspects of the team’s performance.

“A lot of it comes down to the work we’ve been putting in between events. The team’s really been taking on the challenge, so to put all of that together was really, really pleasing,” he says.

And with three solid races under their belt, the New Zealand SailGP Team’s eyes will be firmly fixed on delivering a strong performance on day two to make it into the final podium race.

“It’s been a great start to the weekend,” says Tuke. “The team’s stoked on today but we’re looking ahead to tomorrow. We really want to make that final race so we’ll bring the momentum we’ve built today into the final two [fleet] races and see how we go.”

The Great Britain Sail Grand Prix continues tomorrow (Monday 1 August NZT), LIVE at 01.00AM on Sky Sport and YouTube. The first as-live replay will air on Sky Sport Select at 0730 AM, with additional replays airing at 6.00 PM on Sky Sport 3 and 7.30PM on Sky Sport 2. Races will also be available on-demand on YouTube.