Racing in Chicago means our fleet are racing on freshwater for the first time and this is the key talking point of the event. The freshwater, which has a lower density than salt water, has increased the boat speed by about 5% - that’s a big difference. This means all the teams’ target boat speed data has changed. The lower density also means the takeoff speed required to foil is approximately 2 km/h higher which of course modifies the boat speed required to maintain foiling through a manoeuvre (either tacking or jibing). Therefore to achieve a foil tack, entry speeds will need to be about 2 km/h faster. 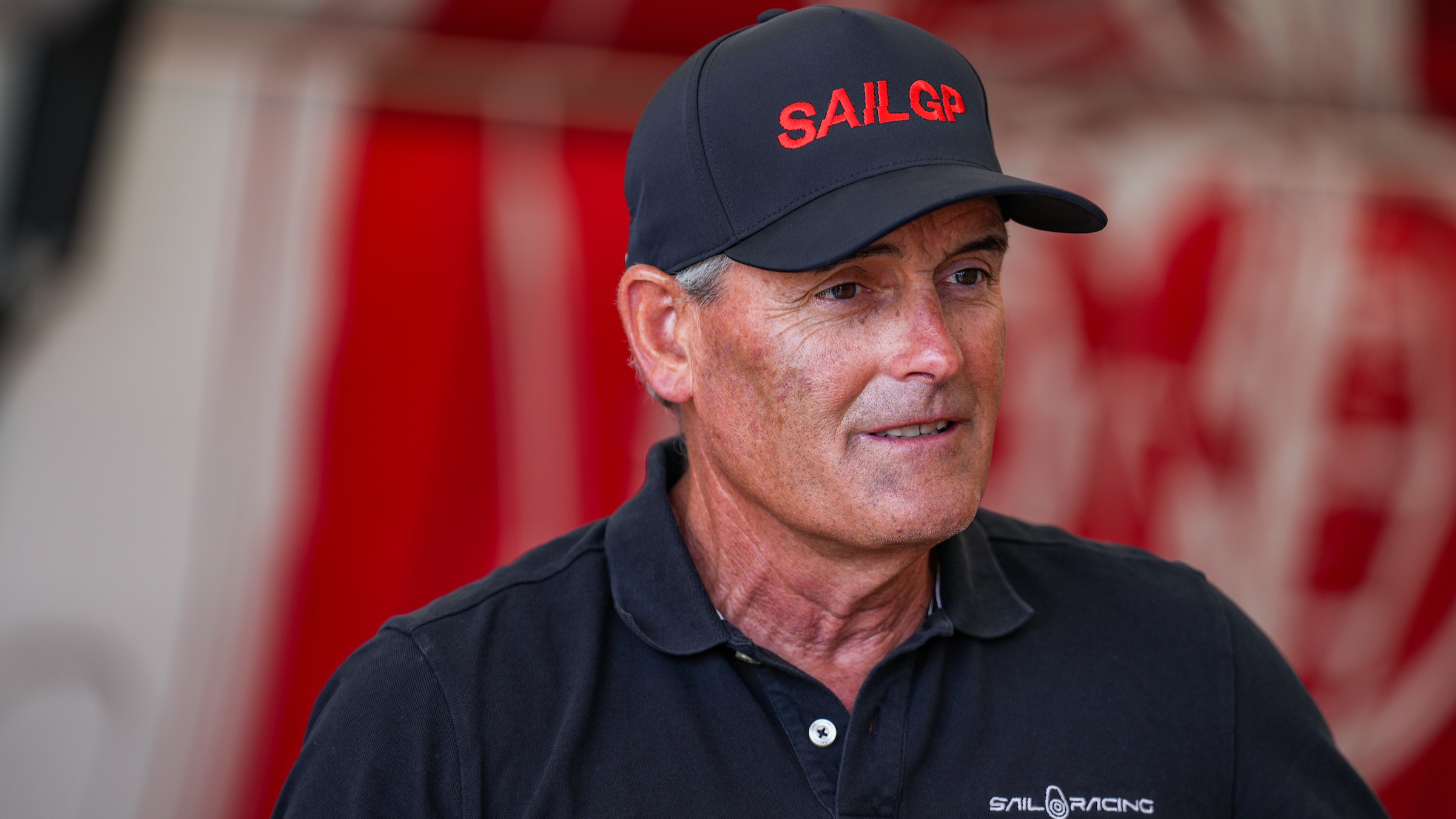 I suspect the teams didn’t realise sailing on fresh water would make this much of a difference until the U.S. boat went on the water two days ago, and that data was able to be analyzed. You can imagine them going into a manoeuvre with salt water targets in their minds, making a mistake and falling off the foils. It’s going to be critical, and one of the factors for Chicago will be who works these new target numbers out the quickest. I think the U.S. team could go well here; it’s light winds and that’s likely not going to play as well for the Australians, although they did come out on top yesterday in the light wind practice racing. 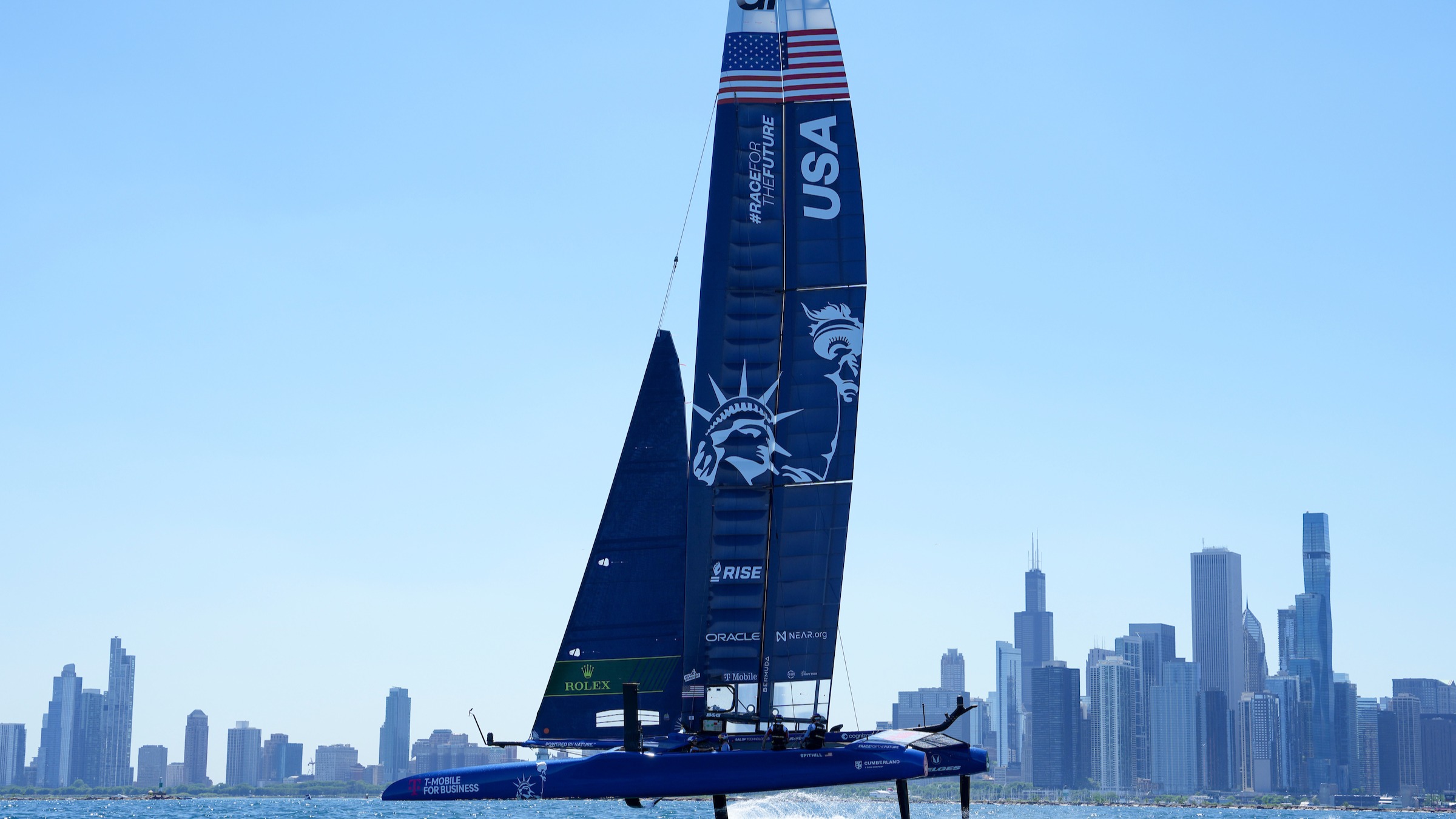 Chicago’s Skyline Stadium is a narrow race course with solid boundary walls and that could make a real difference. In the NE conditions expected for Saturday, the top end of the course is very compressed and you won't want to be doing an additional tack or jibe unless there’s a compelling wind reason to do so. If you get a crowded mark at the top gate, there’s going to be some big winners and some big losers.

In practice racing the teams had some of the lightest wind conditions so far, and forecasted light winds mean the teams will have a harder time getting up onto their foils. Therefore the later approach to the line with the boat already up on the foils means the timing to the line isn't as critical. A boat already on the foils at full speed will blast past boats that are just getting onto their foils. Nathan Outteridge used this technique well with great results in Season 2. 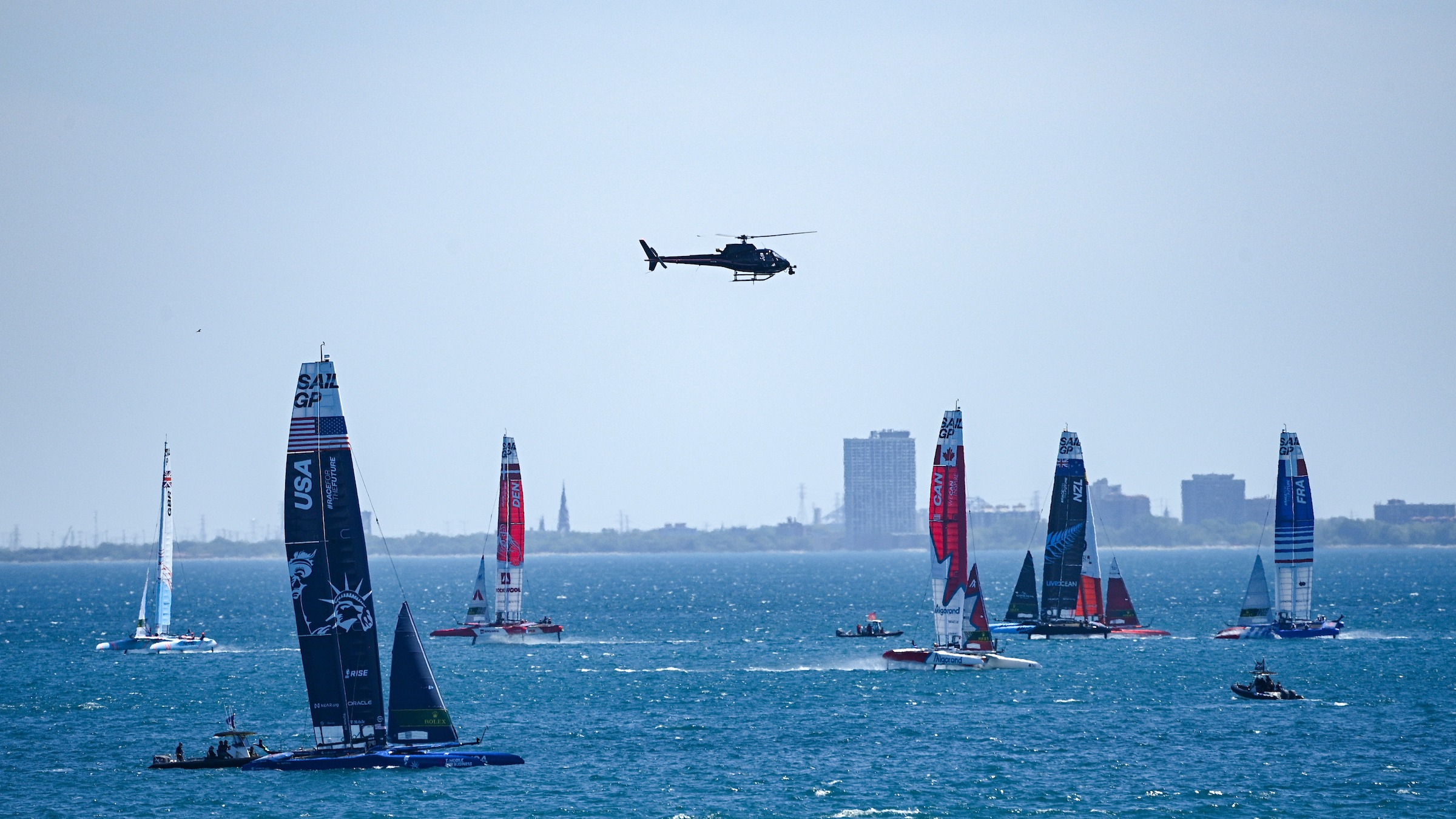 It's been interesting that the Kiwis have been using the late approach to the line in almost all events and all conditions and quite frankly in my opinion that's been a high risk strategy in anything other than marginal foiling conditions. But this weekend that strategy could play into the hands of the Kiwis, who have been practicing it pretty much for the last year and a half!

Looking back on Bermuda, I was amazed at the performance of Denmark but I would be very surprised if they are able to do better than that this weekend. Their improvement has been impressive though and they did record an impressive top speed of 95 km/h in practice. 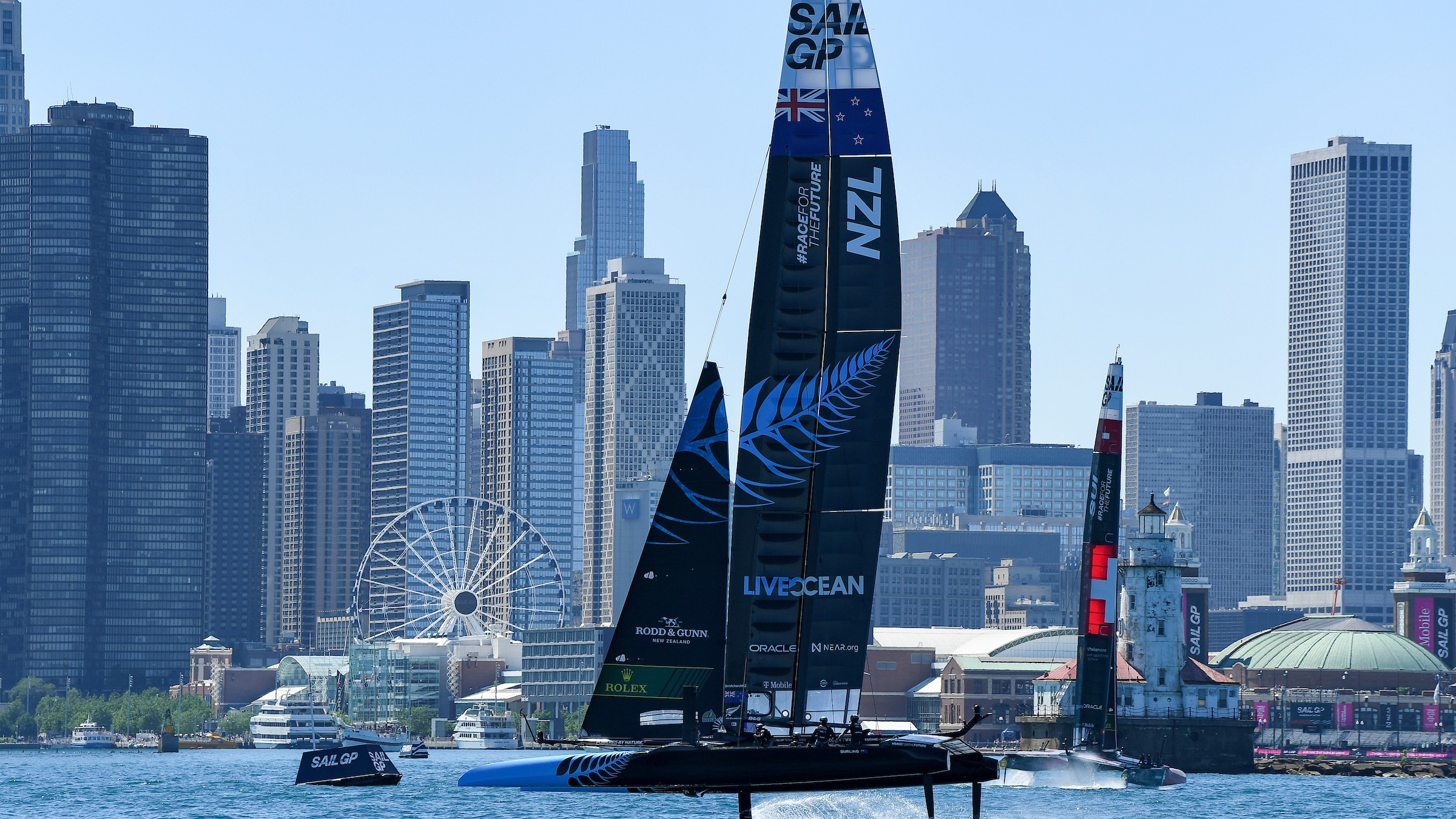 The Kiwis have been plagued by poor results on the first day. In the practice races in Bermuda they looked very good, but practice is different to racing and they repeated their form of having a disastrous first day (for example Cadiz, Sydney and San Francisco). However, they have their A team back with Andy Maloney on flight control and Josh Junior up front helping with tactics, so maybe this might be the event they break through and get onto the podium.

France was a team that had a very strong performance on the first day in Bermuda. They then screwed up on the second day with the Black Flag but they’re going to learn a lot from that too. The start from Quentin Delapierre - it was just not the time to be that aggressive and it killed their performance. He was kicking himself after that but there’s no greater school of learning than the school of hard knocks. With Kevin Peponnet on board as wing trimmer, it means they are all-French speaking and that's got to be better for their comms. Another thing that’s changed is the team are now developing their own thought processes more collaboratively rather than being told what to do. That’s a massive change and likely to be a good change. 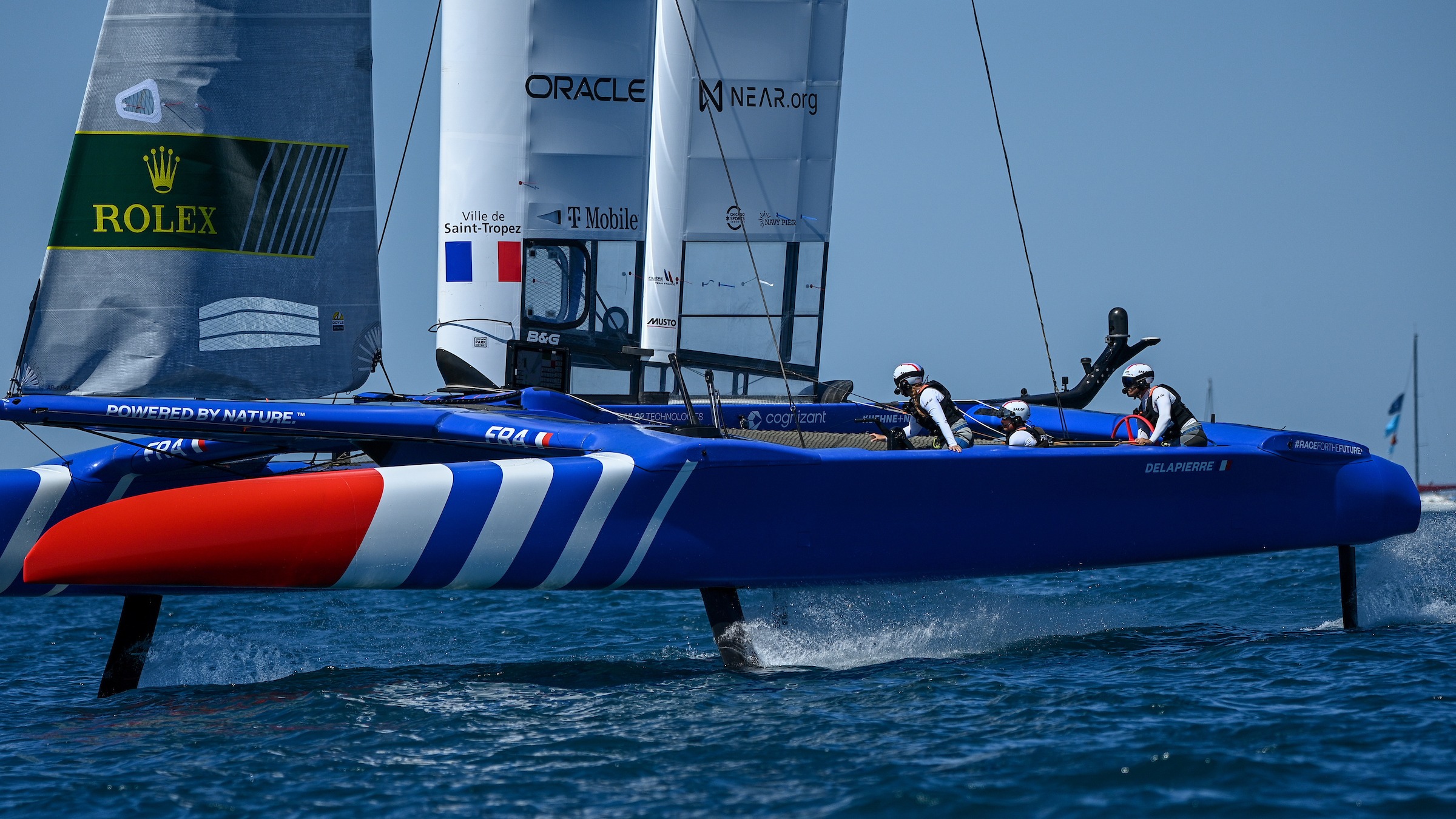 One team that didn’t do so well in Bermuda was Spain. Their grinder Joan Cardona got injured and they had to switch around their team - that was a tough situation. They’re back up to full strength in Chicago and that should help. I don’t have high expectations of the Spanish yet - they struggle to maintain their positions in the fleet and need to work out how to lock in their positions when they are in the front half of the fleet rather than losing places and vital points. 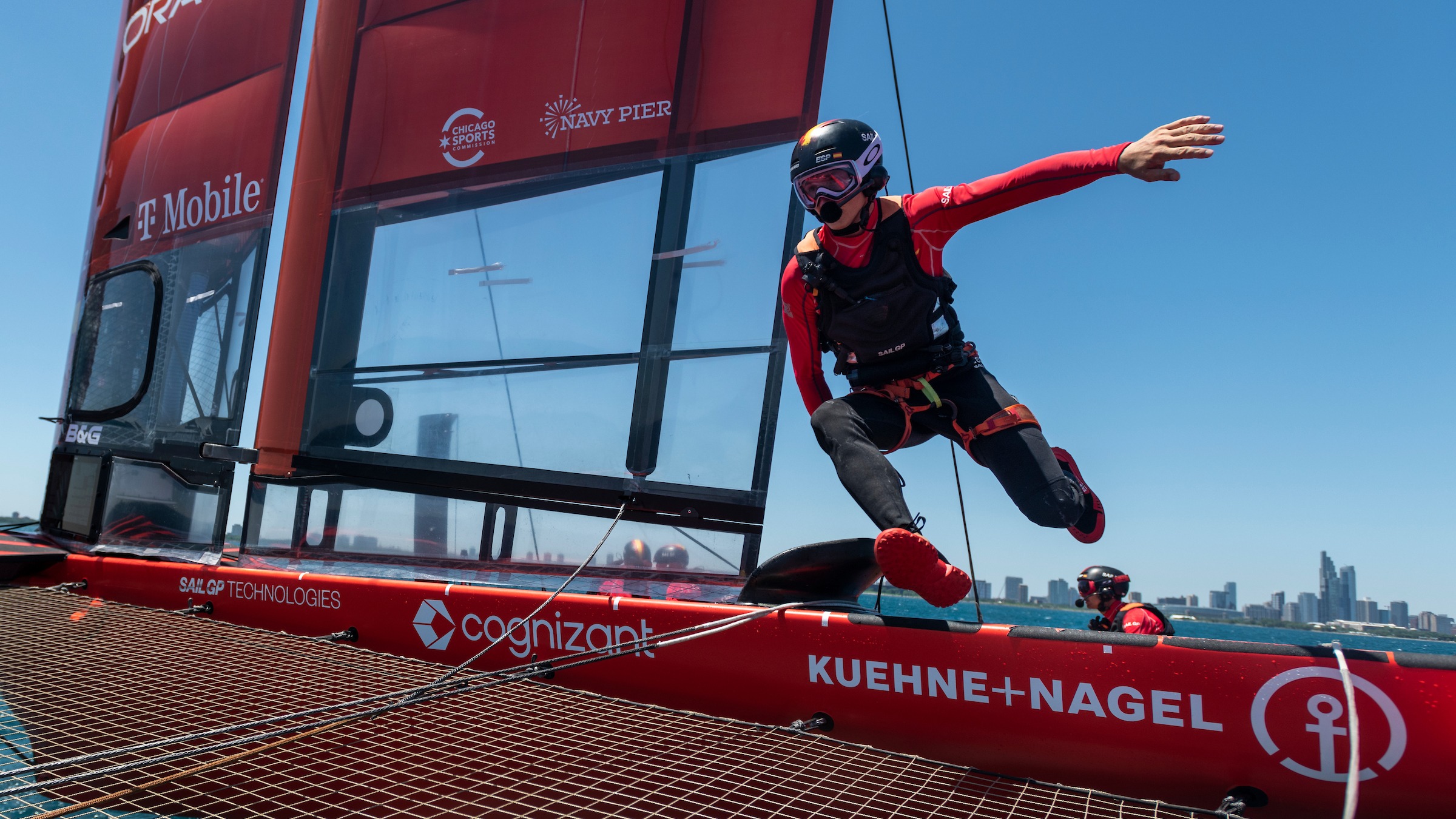 Another talking point in Bermuda was Canada Driver Phil Robertson’s approach to the Final. He had a fantastic event but his record in finals is pretty poor - he was second in Taranto (and that was only because the U.S. hit an underwater object), and he was third in St Tropez, Sydney and Bermuda. That’s not a good stat when there’s only three boats in the final! He’s got to tidy up his approach and not push low percentage strategies.

When it comes to Australia, flight controller Jason Waterhouse is turning into a bit of a weapon. The communication between Waterhouse and wing trimmer Kyle Langford is really strong on that boat. Communication is key in changeable conditions - the flight controller hasn't got a lot of visibility of the wind coming across the water so is relying on someone to provide that information. When the boat accelerates or decelerates in a gust or a lull it obviously requires a change in the foil pitch so the flight controller needs to adjust the angle of the foils. If the flight controller reacts after that acceleration, then they’re behind the curve and the magnitude of foil adjustment will need to be more so the ride height won´t be as stable. But Langford is giving Waterhouse great information and that’s possibly one of the reasons they are able to fly their boat slightly higher with more stability. 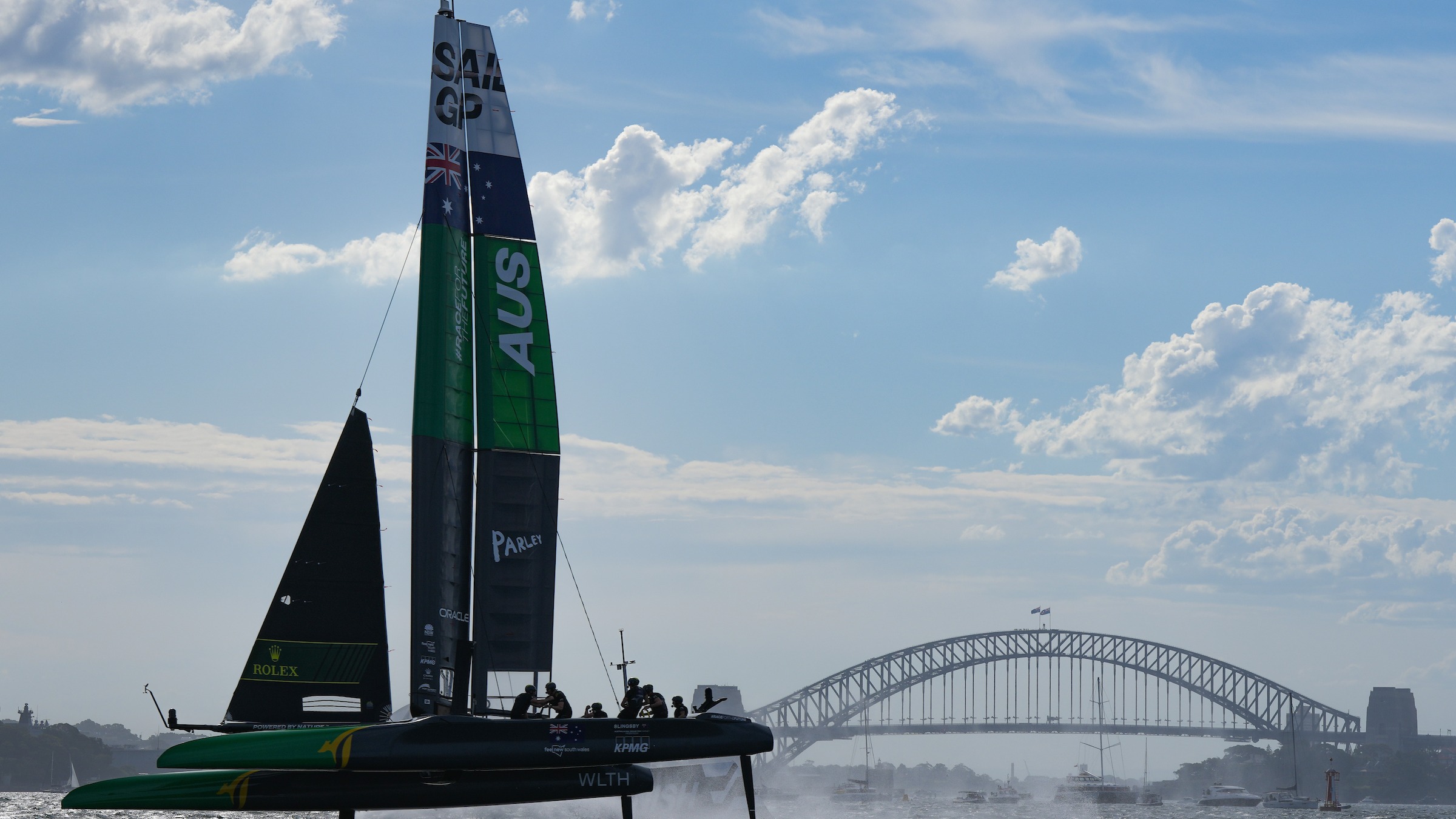 My predictions for the podium are Great Britain, the United States and New Zealand - although that wasn´t the case in today´s practice racing. Australia dominated again! Let’s see what Chicago has in store.