While the overall standings have Jimmy Spithill and the American team still in seventh place, their massive progress over the last two events has significantly consolidated the rankings, with the Americans narrowing their podium deficit to only seven points.

Driver and CEO Spithill was impressed with the team’s composure during today’s two hotly contested fleet races, even when key maneuvers did not go as planned. “We had our moments but we fought back,” he said. “There are so many passing lanes out there in these conditions; we tried to keep composed and take the opportunities.

“There were a number of teams that could have made that final. Full credit to the squad for keeping cool and getting the result.” 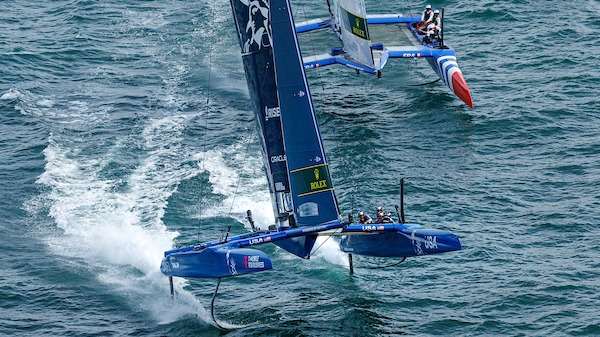 Earning its second podium final race in as many events, the American squad now sets its sights on the next test, when SailGP heads to the Middle East in November. “While clearly we would have loved to win today, this is a great result for the team to get a big points spread like that. We’re going to try and carry that through to Dubai.”

“We were under real pressure the last two events, but the way the team has stuck together has given everyone a lot of belief and confidence. But, now we have to keep this going.”

Spithill has been clear since the beginning of Season 3 that he’s investing in building depth in the team roster; a strategy that many questioned early on when the team struggled in the standings. He used Strategist Erika Reineke, who trialed with the team for the first time this weekend, as an example of how the strategy is paying off.

“What a great job she’s done; she's a real team player that fit in straight away with everyone,” Spithill said. “At the beginning, we took a lot of [bleep] about what we’re doing and our strategy, but Erika’s been fantastic and we’re excited to add another great athlete to our squad.”

SailGP heads next to the Middle East for the Dubai Sail Grand Prix presented by P&O Marinas, November 12 - 13.