The Umpire’s Call: Craig Mitchell on Cádiz’s close crosses and the five teams punished for crossing the line early

SailGP’s chief umpire Craig Mitchell has given his penalty rundown of the Spain Sail Grand Prix presented by NEAR, revealing that a total of 17 penalties were dished out across the weekend from 37 protests.

Seven of these were boundary penalties for straying outside of course limits, while five were OCS penalties, which punish teams for crossing the start line early.

Two of these occurred in the very first race of the weekend, with Great Britain and Australia both crossing the line early. An OCS penalty forces the offending boat to drop 20 meters behind the back of the pack.

Three more OCS penalties were handed out in the fifth Fleet race of the weekend after New Zealand, the United States and Spain all crossed the line early. This incident, Mitchell says, ‘generated the most discussion’ across the weekend, with New Zealand crossing the line just under five seconds early, followed by the U.S. and Spain with around one second to go.

Mitchell admits that it looked as if ‘a number of other boats’ also started early on the broadcast but they were ‘bang on time’ according to the UmpApp.

New Zealand and the U.S. were able to clear the penalty quickly by not turning towards the first mark. This meant they immediately dropped behind Great Britain, which was the last boat to start, and were then free to carry on their race. Spain however didn’t react as quickly and struggled to get behind the British boat to clear the penalty.

Elsewhere, a total of five Part Two (boat on boat) penalties were recorded across the weekend, most of which were for close crosses between boats.

The most memorable of these occurred in the fifth Fleet race when New Zealand, under pressure to secure a place in the Final, barged inside Switzerland at the second gate.

“We knew that New Zealand would be going with a high tariff strategy to try and make it into the Final,” Mitchell said, “they knew what they had to do in that race but they pushed too hard.”

As a result, New Zealand was handed a double penalty, which requires the offending boat to drop behind the fouled boat by 40m, as opposed to the usual 20m.

“If a boat makes a gain by breaking a rule, they can be given more penalties,” Mitchell explains. “We gave New Zealand an additional penalty relative to Switzerland for pushing in at the mark because we’re trying to discourage teams from breaking rules in the first place. 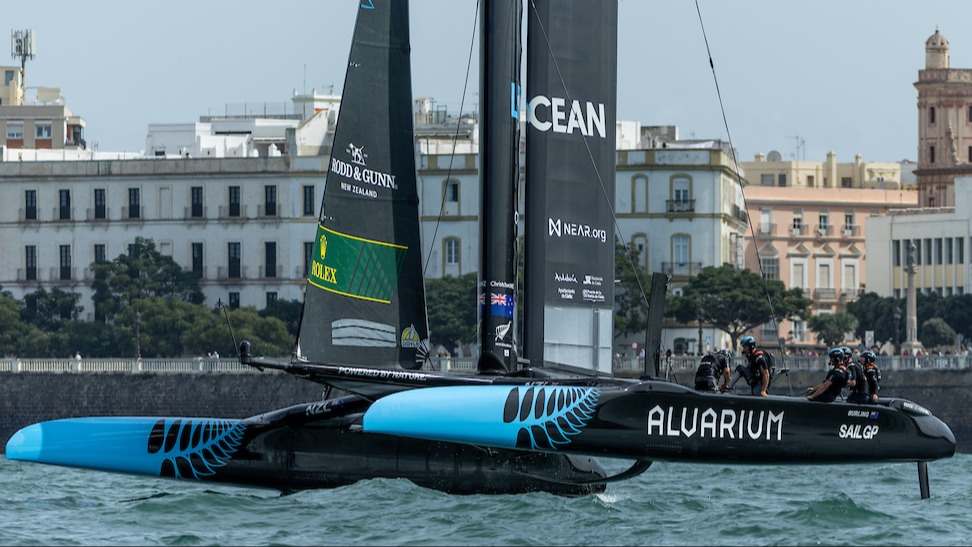 "New Zealand could have chosen a different option, such as dipping behind the Swiss or bailing out, missing the mark and re-rounding. In the end New Zealand’s loss was over 70m after manoeuvring to clear the penalty.”

During the fifth Fleet race, the umpire team keep a keen eye on those teams in contention for a place in the Final, Mitchell revealed.

“We’re really watching the teams that might be tempted to take more risks in order to get into the Final,” he said.

Elsewhere, Switzerland picked up two boat-on-boat penalties across the weekend; one on the first day of racing for a close cross with Denmark and another on the second day for diving inside Australia at the third gate. “The Swiss were astern when they reached the mark zone (a 50m circle around the mark) but it was close enough that they may have thought they just had an overlap so took the gamble, but it didn’t pay off,” Mitchell said.

The Swiss picked up a second penalty during the incident with Denmark for not taking the first quickly enough. “It was a hard penalty on them, but we want to see the boats clearing their penalties as soon as possible,” Mitchell said.

However, the umpire team is working with UmpApp development team to a provide penalty clearance distance countdown to the drivers displayed on the wing screen. This, Mitchell said, will give drivers greater oversight on how far they have to go to clear the penalty and help them to judge the best way to take it.

“They can only see the boat they infringed so it’s quite difficult for them to visualise exactly where the penalty line is,” Mitchell said, “this update will mean that they can see the distance to the penalty being cleared going down or up.”