“We were on the edge all day,” said a smiling Jimmy Spithill whose United States SailGP Team sits in second place overall after one of the fastest competition days in SailGP’s history at the Range Rover France Sail Grand Prix in Saint-Tropez.

Spithill has repeatedly said consistency is the key to success in the highly-competitive league. With today’s second-place and two third-place finishes, it appears the team is cracking the code on a day that saw new records and multiple near capsizes amid the nine-strong fleet. 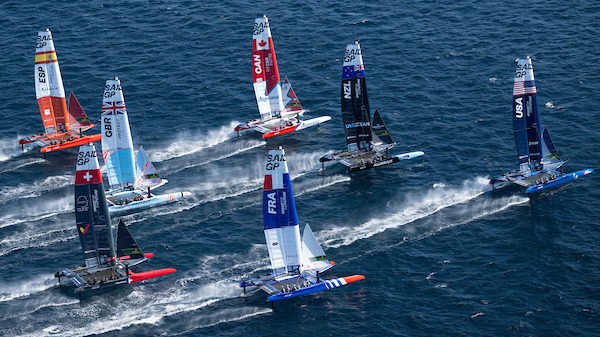 Conditions like today test every athlete’s physical and mental abilities, in particular the flight controller, which handles the ride height as the F50 lifts above the water. Fly too high and the boat gets ‘loose’, which can porpoise and violently nose dive; fly too low and it causes drag that creates friction and lower speeds. Spithill gave full credit to Hans Henken today, in just his fifth event at the position.

“Collectively I thought everyone sailed the boat very well. In those conditions, the key is trying to put three clean races together, and man, no doubt we were on the edge all day.”

Another team positive today is three strong starts. “We’ve been studying really hard with Philippe [Presti - U.S. SailGP Coach]. He’s really been driving the strategy behind the scenes, and the team – and I – have been open to the ideas to become more consistent.”

Looking ahead to the new format of ‘Super Sunday,’ in which SailGP plans to run three fleet races (previously two), Spithill is looking forward to the additional race to further cement the team’s place as one of the three top boats to compete in the final podium race.

With lighter winds forecasted, Sunday’s conditions will be a sharp contrast to today, putting a premium on the team's ability to adapt. The F50s will use the standard 24-meter wing (79 feet), compared to today’s smaller 18-meter (59 feet) wing.

Sunday’s Racing begins at 8:30 a.m. EDT and fans can watch the action unfold live on SailGP’s YouTube channel. Later in the day on CBS Sports, Saturday’s action will re-air at 4:30 p.m. EDT and the Super Sunday conclusion at 8 p.m. EDT.